Let’s say I have this small HTML snippet:

I also have these styles defined:

With this setup, scroll bars appears with the outer div: 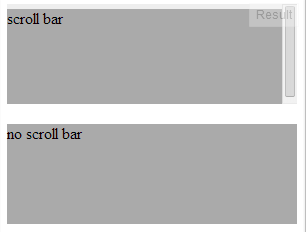 Why does the nested inner div causes this scrollbar to appears?

I can remove the scrollbar by removing the margin-top rule, but this would cause side effects.

Here is a jsfiddle that reproduces the issue: http://jsfiddle.net/stevebeauge/PTA85/

[edit] : my actual issue is solved by replacing margin-top by padding-top, but I’m looking for an explanation, not only the solution.

This is occurring because the margins are collapsing.

In CSS, the adjoining margins of two or more boxes (which might or might not be siblings) can combine to form a single margin. Margins that combine this way are said to collapse, and the resulting combined margin is called a collapsed margin.

Replace the margin with padding (example).

Change the display of #inner2 from block to inline-block (example)